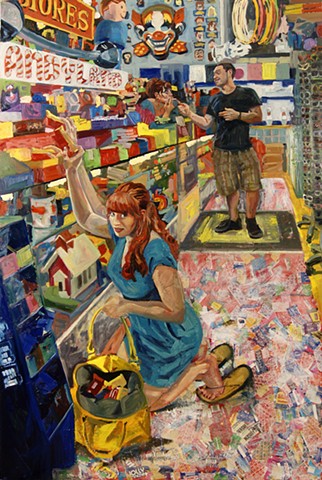 This story highlights the good and the bad of being a woman and the many roles we often play. In this story, our most significant role is that of the savior, as shown by our heroine, Gretel, who rescued her brother from being torched to death. We are also depicted as the jealous stepmother who can't do enough to get rid of those pesky step kids. After watching a puppet show of Hansel & Gretel put on for a bunch of five year olds, my mother asked how I felt about the production. My response was, “why is it always ‘Hansel & Gretel’ and never ‘Gretel & Hansel’?"

NOTE: No stepchildren were harmed in the making of this painting. In fact, much of this was the brainchild of my stepson…especially the part about lighting his “Pissy Stepmom” on fire.